MELKSHAM darts team, The Liberal Spitfires, have won this year’s professional darts corporation (PDC) challenge known as Down Your Local. 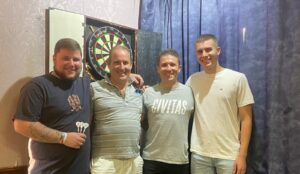 Their win was filmed by Sky Sports. The prize for the winning team, who represent Melksham Liberal Club, is the opportunity to watch the Darts World Championship quarter-finals at Alexandra Palace on 1st January.

Captain of the Liberal Spitfires team Dave Shepherd said, “The aim of the Down Your Local game is to score as many as you can on bulls (three points) and 25s (one point) in 90 seconds. As captain, I had the difficult job of deciding who would represent our team. Our team was represented by Jake Neale, Aidan Wiltshire, Terry Sheppard and myself. So, unfortunately, I had to leave out the others, who were Adi Cooper, Aaron Fennel, Rich Jones, Toby Gingell and Glen Sheppard. “On the day of the filming, Adi came along to support us and saw us smash the leading score of 27. In the end, when all added up, we had scored 40 points. As the overall winners, all four of us are now off to Alexandra Palace as VIP guests of the PDC on 1st January 2023 to see the world championship quarter-finals.”

The Liberal Spitfires have played together for many years. Dave said, “We are all keen darts players and now we have won a national competition, with the prize being something you cannot buy. We now know that we will be going to the world championship quarter-finals and we have been told we will get to meet the players and will get to go up on the main stage for photos. It is a once-in-a-lifetime opportunity.”

Sky Sports will screen the team’s win on The Darts Show on Thursday 1st December.

Dave said, “We do not know the time we will be on Sky Sports yet, but the programme is on from 6.30pm.”