THE boundaries of constituencies in Wiltshire will potentially be changing as part of the 2023 Boundary Review, which now sees Melksham move away from the Chippenham constituency and instead, be merged with Devizes. 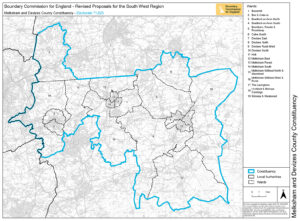 Secretary to the Boundary Commission for England, Tim Bowden said, “We are announcing the publication of our revised proposals. Last year we published our initial proposals for new constituency boundaries, our first go at what the map should look like.

“We are delighted with the huge number of comments from members of the public on our initial proposals, many of which included valuable evidence about local communities.”

The Commission has considered 45,000 comments sent in by the public in the previous two stages of the public consultation. It has changed nearly half of its initial proposals based on the feedback.

Tim Bowden said, “This is a culmination of months of analysis and we have revised nearly half of our initial proposals based on what people have told us. We now believe we are close to the best map of constituencies that can be achieved under the rules we are working to. However, we still want people to tell us what they think of this latest map before we submit our final recommendations to Parliament next year.

“This is our final consultation and I encourage you to participate in the 2023 Boundary Review.”

The public are invited to share their thoughts on the new map by 5th December, ahead of the Boundary Commission review in July 2023.

The map can be viewed here, bcereviews.org.uk.