AFTER months of uncertainty, plans for a second primary school at Bowerhill are moving forward, but critics say progress is much too slow. 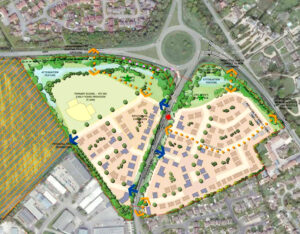 Wiltshire Council is to put in a planning application next year but say the school will only be built when other Melksham primary schools are full. And this has brought criticism from critics who want the scheme fast tracked.

As part of the new Pathfinder Place development in Bowerhill, land was allocated for a new school back in 2016. But despite the Pathfinder houses being built, there had been no news until now about the school, leading to fears that the scheme had been shelved.

Now, though, Wiltshire councillor Nick Holder said the scheme is going ahead. He said, “I have been asked many times about the progress of building the new primary school in Bowerhill and I can now confirm the first stage of the procurement process will start later this month which should lead to a contractor being appointed in early 2023.

“A formal planning application will then be brought forward in the middle of next year.

“It’s good news; the school is a long way from being built but the important thing is the planning application is going in and Wiltshire Council is in the process of getting a project manager employed and allocated to the project.

“I don’t know when it will be built. It’s all to do with the increasing birth rate, the increasing number of houses and when the existing schools are at full capacity. It will only get built when it’s needed, but the planning application is a very good first step.”

School needed sooner rather than later But the vice chair of Melksham Without Parish Council, cllr David Pafford, says this isn’t good enough.

He said, “We’re delighted to hear progress is being made but we need the school sooner rather than later.

“Wiltshire Council may say there are enough places for all the extra children in existing schools, but it’s no good if the place is on the other side of town; it’s got to be accessible.”

With new housing estates recently being built at Bowerhill, Berryfield and near Snowberry Lane, with more to come, primary school-aged children are already travelling to other schools in the town.

Cllr Pafford added, “The cycle and walkways are inadequate and involve going over the busy Western Way. It’s just not good enough; the new school is needed as a matter of urgency particularly as, along with the houses already built, there are two more estates coming on stream in the next year or so.

“If we don’t build the school until the other schools are at capacity, then that’s too late.”

Talking about plans for the new primary school, cllr Nick Holder added, “It’s planned to be a two-form entry school with capacity for two forms in every year but is likely, from what I’ve been told, that it could be built in phases, so could be built initially as a one-form entry and extended as demand increases, but that would depend on birth rates and capacity in the other schools.

“When I’ve been out and about at Bowerhill there have been comments about, ‘Will it ever get built?’ and there have always been rumours and speculation. It’s at a very early stage, the planning application will come forward next year, but this is the first step in what is a long, but welcome process.”