Developers appeal decision to refuse plans for 50 houses in Berryfield

AN appeal has been launched over Wiltshire Council’s refusal to grant planning permission for 50 houses, on land west of Semington Road. 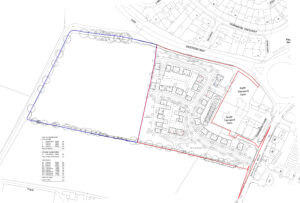 Developer, Terra Strategic, submitted outline plans (ref: 20/07334/OUT) to build 50 houses on the land last year. In the plans it was proposed that Terra would offer one to four bedroom houses for market and for shared ownership, and affordable rent.

In turning down the bid, Wiltshire Council planning officers said that the proposed development, in open countryside, was outside the limits of development defined for Melksham in its own core strategy.

“The proposal conflicts with the Council’s plan-led approach to the delivery of new housing sites outside of the identified limits of development,” they said.

“The proposal would create a large block of housing isolated from other development by surrounding fields. It would result in a significant closing of the gap between Melksham and Berryfield, which have separate identities that need to be maintained.  The urbanising effect on this area of open countryside and the rural footpaths/roads nearby would have an adverse impact on the character and appearance of the area.”

Officers added that the plans did not deliver the necessary infrastructure needed to lessen its impact on the area. No date or time has been given for the appeal currently. Those interested in commenting on the appeal must contact the inspectorate by Tuesday 14th December.

For more information about how to comment, visit: www.wiltshire.gov.uk/planning-appeals