MELKSHAM artist, Jaimee Andrews, had a moment in the spotlight this month when she appeared on TV, competing in Sky Art’s Portrait Artist of the Year. 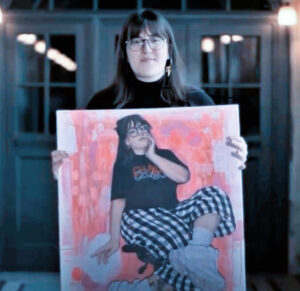 Pictured above: Melksham artist Jaimee Andrews with her self-portrait.

For the competition, Jaimee competed against nine other artists for a spot in the semi-finals, and was tasked with painting a portrait – in four hours – of actor Hugh Skinner, who is best known for his TV roles as intern Will in W1A, Prince William in The Windsors, and as Phoebe Waller-Bridge’s on-off boyfriend in Fleabag.

And whilst Jaimee wasn’t chosen for a place in the semi-finals, the artist has described her ‘whirlwind’ experience as ‘amazing’.

About how she became involved in the TV show, Jaimee told Melksham News, “I applied to be on the show through entering the show’s call for artists. To enter, I had to paint a self-portrait (pictured) and one additional portrait to send in online. I’ve always loved painting portraits, so I thought why not try and have a go. From that, I was picked to go into the heats of the show.

“The whole process was a complete whirlwind, alternating between filming, interviews, and painting. I tried my best, but the four-hour timeframe [to paint the portrait of actor Hugh Skinner] was so challenging – I struggled with my painting. [But] I had such a great time, and met lovely people. Watching everyone create their portraits was amazing too! It was completely hectic, and a lot of fun!”

About what’s next for her, Jaimee said, “I currently design greetings cards, and freelance as an illustrator, so I have always got lots of different projects on the go.

“I also sell illustrated prints and goodies online, so I am looking to make a lot more products. I would love to show my art one day, and in Melksham would be even better- maybe that could be on the cards? For now, you can view my work on my website: .”

The episode featuring Jaimee (episode 5 of season 8) was broadcast earlier this month on Sky Arts. It is available for ‘catch-up’ on the Sky website: www.sky.com