Yu-Gi-Oh! enthusiasts to face off at world championship qualifiers!

PLAYERS of the popular Japanese card game, Yu-Gi-Oh! will make their way to Melksham’s Assembly Hall this Sunday, 28th November, to battle it out at the regional qualifiers of the World Championship in 2022. 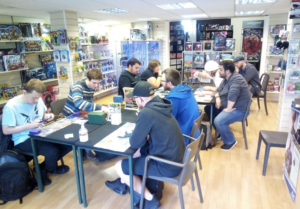 Yu-Gi-Oh! is the number one trading card game in the world with over 25 billion cards sold. It was developed and published by Konami and is based on the fictional game of Duel Monsters, created by a manga artist Kazuki Takahashi, which appears in portions of the manga franchise of the same name. The game was launched in Japan in 1999 and has since spread worldwide.

The event, which will be held in Melksham from 10.30-am to 6.30pm, will be hosted by the local toy shop, The Toy Planet, who host a series of successful and popular weekly game nights at their shop, thanks to their directors Kayleigh Rose and Barry Howard.

Barry said, “As a small store that has only been open since December 2020, to have been chosen to hold a regional qualifying tournament for a World Championship is an amazing feeling and a great way of celebrating our first year in Melksham.

“Although we were only open for one month prior, during lockdown we took the opportunity to extend the shop to enable room for tabletop gaming, but we never imagined it would take off as quickly and become quite so popular as it has done.

“We have been given the exciting opportunity to host regional qualifiers for the Yu-Gi-Oh! World Championship 2022. This is due to how popular our weekly in-store tournament has become. Each week, we have players coming in, taking part in local leagues to win exclusive prizes!

“On the day, the world championship qualifiers (WQF) will have 150 players taking part, travelling from Wiltshire, Gloucestershire, Dorset, Somerset and Bristol. Each of them will be competing to finish in the top eight, to qualify for the next round!

“We have a wide range of players starting at just eight years old, right through to 40+ so it really is an exciting opportunity for all. With such large numbers taking part, we have decided to hold it at the bigger venue of the Melksham Assembly Hall.

“I think you’ll agree with us by saying this is a great way of bringing more people into Melksham.

“We have been very fortunate to find our tournament organiser Shane Lacey, as Kayleigh and I are both relatively new to the Yu-Gi-Oh! scene, Shane is on hand to oversee the running of the ‘locals’ group of between 6-12 players in store each week and our Yu-Gi-Oh Facebook group” [which can be found at https://www.facebook.com/TheToyPlanetWilts/].

The winners of the regional finals will make their way to the national championship, before fighting for a place in the world championships later next year.

One Response to Yu-Gi-Oh! enthusiasts to face off at world championship qualifiers!