PLANNING permission has been granted by Wiltshire Council for a new solar farm in Beanacre. 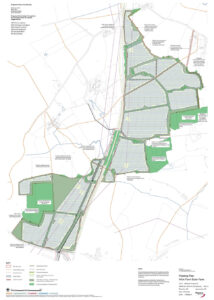 The Wick Solar Farm and battery storage facility will be located on approximately 200 acres of land at Wick Farm, Beanacre.

Both of Melksham’s councils raised no objections to the plan when considering it last year. However, Melksham Without Parish Council did raise concerns about the scale and size of the solar farm, and its visual impact on Westlands Lane residents.

Nearby residents of the site also raised concerns about the impact on their view from their properties, its impact on local wildlife, and its impact on flooding in Westlands Lane.

Planning consultant, Pegasus, says that ‘a number of compromises’ have been made in response to the feedback, including a 50 metre wide ‘open corridor’ along Westland Lane, retained for agricultural use.

A planning consultant with Pegasus, Mark Herbert, told Melksham News, “JBM will be delighted with this outcome and it’s a testament to the planning system and its focus on consultation and community engagement.

“We submitted the planning application on their behalf back in August 2020 but have since worked patiently with the Wiltshire Council’s planning officers to ensure their concerns, and those of others, were addressed as fully as possible.

“JBM believe that this location is good candidate to make a real contribution to the UK’s shift towards renewable energy and carbon reduction, and were always prepared to listen carefully to the views of local residents and their elected representatives.

“JBM made a number of compromises in refining the design of the solar farm, for example in setting aside a 50 metre wide open corridor along Westland Lane and increasing the extent to which the development will enhance local biodiversity through new planting and habitat.

“Officers were rightly concerned that any scheme would bring real benefits in addition to the clean energy, and I think this is a very positive outcome for Wiltshire.”