BOTH of Melksham’s councils have stood firm in their objections to a plan for 50 houses on land west of Semington Road, in light of an appeal made against Wiltshire Council’s refusal to grant planning permission. 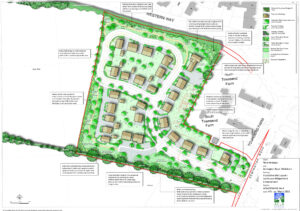 Plans for the site west of Semington Road.

Melksham Without Parish Council and Melksham Town Council have both reiterated their objections about the housing plan, which includes concerns about the erosion of the rural buffer between Berryfield and Melksham, the poor pedestrian access to the town and over the A350 road, the lack of school facilities to support the development, and its impact on the proposed Melksham canal link between Semington and the River Avon.

Both councils have also added the Melksham Neighbourhood Plan – which sets out where the community would prefer to see housing built – to its list of reasons why the development should not be allowed to go ahead.

At a recent town council meeting, cllr Jon Hubbard, who described the 50 houses as ‘inappropriate and excessive development’ – explained that now the neighbourhood plan is ‘in force’, it can add weight to their objections.

Melksham Without Parish Council also signposted to the Neighbourhood Plan, highlighting that it was recently used as a key reason by Wiltshire Council to turn down an application to build 231 houses on land south of Western Way.

Behind the planning appeal is developer, Terra Strategic, who originally submitted the planning application to build 50 houses on the land in 2019. Their original plan proposed six affordable houses, and 9 social/affordable rental properties as part of the development.

Their appeal now proposed that the development has 100% affordable housing, which has raised some concern that Wiltshire Council may look at it more favourably.

“The issue we’re going to have is that what Wiltshire Council turned it down on had a lot to do with affordable housing,” said town councillor Saffi Rabey at a recent meeting, “which they have now addressed in their appeal.”

However, cllr Hubbard emphasised that the town council should stand firm behind their original objections.

In response to the changes to the plans, Melksham Without Parish Council raised a concern that residents of a development containing 100% affordable housing would ‘less likely have access to a vehicle’.

“Therefore, increasing pedestrian movements, to access facilities in the town, as there are none in Berryfield, across the busy A350,” explained the parish council. “The Parish Council have previously raised concern at the dangers of pedestrian crossing on the A350, particularly on its Western arm (adjacent to this site), as it does not have a pedestrian crossing.”

The deadline for comments on the appeal was last month.