Cemetery trees were felled because of ‘risk to public’, says Wiltshire Council

WILTSHIRE Council has responded to criticism after a number of trees were felled in Melksham Cemetery. 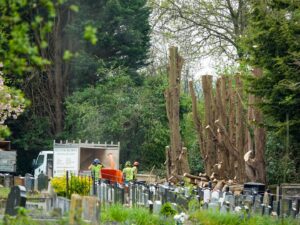 The conifer trees were felled on Friday 29th April by contractors working for Wiltshire Council. Residents contacted Melksham News, concerned that the works were taking place during bird nesting season; and some residents questioned why the works being done on what they thought were ‘perfectly healthy’ trees.

“We should be saving our trees, planting more,” said one resident. “Not cutting them down!”

But Wiltshire Council has explained that the trees were in poor health and were a risk to the public.

Wiltshire Council’s cabinet member for streetscene, cllr Dr Mark McClelland, told Melksham News, “Over the previous 18 months it has become apparent that a number of conifers, within Melksham Cemetery, were in poor health. Most recently they have started to shed limbs. Following an inspection by a trained arborist it was concluded, that on grounds of safety, these trees required felling.

“While we will always attempt to carry out this type of work outside of the bird nesting season, where there is a significant risk to the public we will undertake felling. Measures are in place to mitigate any impacts on nests and we have complied with all relevant legislation and codes of practice when undertaking these operations.”

One Response to Cemetery trees were felled because of ‘risk to public’, says Wiltshire Council