Christmas carols with a difference for Melksham?

MELKSHAM Town Council is exploring the possibility of hosting a Christmas carols concert outside the Town Hall. 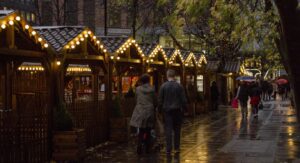 Originally proposed by cllr Pat Aves as a ‘simple’ free carols concert to bring the community together – the event could become a new ‘magical’ event for the town, with councillors suggesting that the event could also include a German Christmas market.

At a meeting of the town council’s community development committee, cllr Tom Price suggested that the council could ‘make a big weekend of it’, giving Bath’s Christmas market as an example to aspire to.

It was also suggested that the Melksham Christmas Lights Group could be asked to project the carols’ song words onto the Town Hall. Representing the volunteer group, Paul Weymouth described the event as having ‘massive potential’.

At the meeting it was agreed that the idea be given to the town council’s events working group to discuss the idea in more detail and explore costs.

One Response to Christmas carols with a difference for Melksham?