A TOWN councillor has said that they are disappointed that the town centre will not be considered for a 20mph speed limit in an upcoming public consultation. 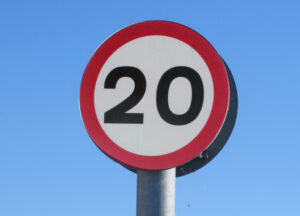 The town council will soon ask the public for their opinion on whether a number of roads in the town should become 20mph zones – the roads they will consult on are Church Lane Churchill Avenue, Hazelwood Road, Snarlton Lane, Savernake Avenue, Queensway, and Union Street.

At a recent meeting of the town council’s economic development and planning committee, the majority of councillors decided to exclude the town centre (from the Bath Road bridge through to the Market Place), King Street, Semington Road, and Addison Road, from the consultation, with some councillors describing the roads as ‘unsuitable’ for a 20mph limit.

But cllr Saffi Rabey disagrees, explaining that she believes that a 20mph speed limit through the town centre would improve safety and reduce carbon emissions.

“It would be less polluting as cars would be moving slower, it would keep noise levels down, and makes it safer,” said cllr Rabey speaking to Melksham News. “It makes a lot of sense to at least have a public discussion about it, and see what the public think; rather than councillors deciding themselves that it is not a good idea.”

At the meeting cllr Phil Alford said that it would be unusual for an ‘A road’ through a town to have a 20mph limit. However, cllr Rabey has dismissed these claims, highlighting that there is a ‘real precedent’ across the country for town centres to have 20mph limits – signposting to Bradford on Avon and Bath as examples.

Cllr Simon Crundell also expressed his resistance to enforcing a 20mph limit on the town centre at the meeting. He said, “When town is busy you can’t hope to get to 30mph, or 20mph for that matter. The problem is in the evening when you can cane it down the High Street, which is reckless and illegal – a 20mph limit won’t stop them.”

He suggested other steps be taken to ensure the 30mph limit is observed in these areas – suggesting the town council deploy its speed indicator devices – electronic signs that tell people to slow down when driving over the speed limit.

However, cllr Crundell did describe 20mph limits in residential areas as a ‘no brainer’. Cllr Alford also urged the council to focus on resident

At the meeting councillors agreed to design a survey to obtain residents’ views on the introduction of a 20-mph speed limit on Church Lane, Churchill Avenue, Hazelwood Road, Snarlton Lane, Savernake Avenue, Queensway, and Union Street. When ready, the surveys will be hand delivered by councillors.