A MELKSHAM resident has been successfully prosecuted by Wiltshire Council for environmental and trading standards offences whilst operating a waste clearance service on Facebook selling sites across Wiltshire. 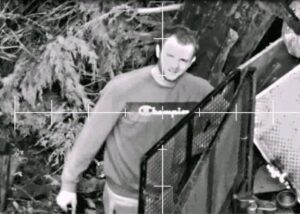 A picture from the MOD helicopter.

• 4th December 2020: failing in his duty of care for waste found to have been fly-tipped on land at Bishops Cannings, Devizes (off the A4 between Devizes and Beckhampton).

• 17th November 2021: disposing of waste in a way likely to cause pollution to the environment or harm to human health by burning a mattress and other waste.

• Between 19th November 2021 and 14th January 2022: falsely advertising in Dentons directory and on social media that his business CC Waste Removal & Clearance was ‘fully audited by the Environment Agency’.

“Video footage taken on 17th November 2021 by a passing MOD helicopter was shown in court. It captured Mr Carr depositing and burning waste, including a mattress, on land near Woodrow Road, Melksham. The land is owned by the Wilts & Berks Canal Trust and was not a permitted waste facility.

“The court also heard how a large quantity of household waste found fly-tipped on land off the A4 between Devizes and Beckhampton. This waste was traced by Environmental Enforcement Officers to a householder in Melksham. They were able to prove Mr Carr had been paid to clear the waste but had failed to lawfully dispose of it.

“Mr Carr was given a 12-month Community Order and fined a total of £1,295, including costs. He was also ordered to attend 12 mental health sessions and 10 rehabilitation sessions.

“Mr Carr’s co-defendant, Neill Ludlow of Woodrow Road, Melksham, had pleaded guilty at an earlier hearing to knowingly permitting the deposited waste on land adjacent to his property. He had denied allowing Mr Carr to deposit waste and denied any knowledge about Mr Carr burning a mattress. Mr Ludlow was given an 18-month conditional discharge and awarded costs of £1,200, plus surcharge of £22 to be paid within 28 days.”

Wiltshire Council’s cabinet member for waste, cllr Dr Mark McClelland, said, “Fly-tipping is recognised as a national issue, and in Wiltshire we take it very seriously.

“As stated in our business plan, we will pursue fly-tipping prosecutions in our beautiful county.

“We have a very clear message: we will not tolerate fly-tipping and will continue to prosecute anyone who believes that they can flout the rules and blight our communities and environment.

“We would like to thank the MOD helicopter pilots, the Environment Agency, Wiltshire Police and all the witnesses who assisted in this prosecution.

“We will now make urgent representations to the Environment Agency to request they revoke Mr Carr waste carriers’ licence.”

Residents can report fly-tipping and unauthorised waste carriers using the MyWilts app, at: www.wiltshire.gov.uk/mywilts-online-reporting or by calling 0300 4560100.