200 not out! Melksham osteopath’s 200th game with the England football team

It’s been a summer to remember for Melksham osteopath, Carl Todd. 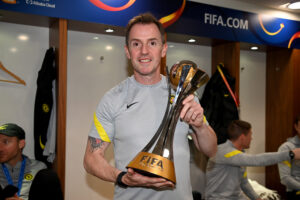 Carl, who lives in Whitley, and runs Carl Todd Clinics in the town, has just returned from the World Athletics Championships as part of bronze medal winner Dina Asher-Smith’s team; and he reached his 200th international game with England as the team’s osteopath. He was also part of the back room team as Chelsea won the World Club Championship earlier in the year.

“It was great to help Dina win a medal in the World Athletics Championships and just a real shame about her injury which will keep her out of the Commonwealth Games. But fingers crossed she will be fit for the European Championships later this month.

“She was in fantastic form in the World Championships, running seven really fast races in nine days including equalling her personal best in the 100m; in any other year she would have won a medal with that time.”

On the football front, Carl has been the England team’s osteopath since the days of Sven-Goran Eriksson and reached his 200th game against Hungary in June.

“It’s scary to reach 200 games. It’s something I never expected; when I first started, I hoped I would do it long enough so my boys could watch a game. 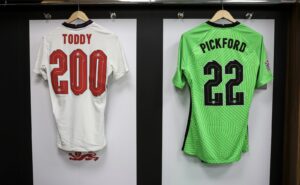 “Now, in the run-up to the Hungary game people were saying ‘Do you realise you’ve done nearly 20% of all the games England have ever played? It’s mad.

“I’m on my fourth generation of players and I think, wow, for someone who comes from deepest Wiltshire, it’s unbelievable really.

“There are so many highlights but a few in particular are, obviously, getting to the European Championship final and World Cup semi-final and the penalty shoot out against Columbia; that was a special one when Eric Dyer scored the winning penalty because we had lost so many of those.

First, he has the new Premier League season to look forward to as Chelsea’s osteopath. It follows the club’s historic win in the FIFA Club World Cup earlier this year.

“That was an amazing night, beating Palmeiras from Brazil 2-1 to win the World Cup for clubs.

“It’s the last piece of the jigsaw as I’ve been with Chelsea when we’ve won every domestic, European and international trophy.

“If England win in Qatar, winning the World Cup for club and country in the same year, that would be extraordinary!

“We’ve got a big season ahead of us first at Chelsea with a few new signings. It wasn’t a bad season last time, winning the Club World Cup and reaching the FA Cup and League Cup finals and finishing third in the league.

“I’m heading up to Chelsea today to start work with the team and from what I hear, everyone at the club is optimistic for the season ahead.”

Carl started his osteopathy career in Melksham 20 years ago with his wife, Mel. He has been working with the England football team since 2005  and he has been at Chelsea FC since 2008.

And when he’s not keeping the country’s top sports stars fit, you can find him working alongside the team at Carl Todd Clinics in Melksham, Corsham or Swindon, treating a range of problems and offering effective relief for issues such as back pain, joint pain, headaches and muscular strains.

“It’s been a really busy year again and I must pay tribute to the staff at our clinics; they have been fantastic; with Mel, my wife running the show.

“Hopefully my work at the World Athletics Championships and with England and Chelsea all helps to put Melksham on the map and shows that anyone can get the same quality treatment as some of the world’s top sports stars right here in Melksham.”