Melksham Blue Pool has closed its doors for the final time, with the very last sessions held on Sunday 24th July. 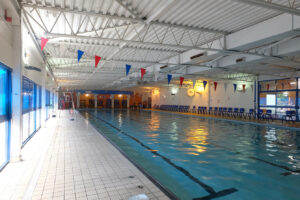 A new town swimming pool, which replaces the Blue Pool, was opened as part of the Melksham Campus in the Market Place on Monday this week.

The Blue Pool opened as an open air pool in June 1957. It was built on land sold to the town by Avon Rubber for the princely sum of £1.

Local people raised funds to help pay for the pool, with a contribution to the cost also coming from monies raised at the post World War II carnivals.

The pool was covered in 1987/88 after a campaign by local people who wanted a swimming pool they could use all year.

Over the decades, thousands of Melksham children learnt to swim in the Blue Pool which was also used for leisure swimming and was home to the Melksham Swordfish Swimming Club.

Manager of the pool from 1958 to 1985 Alf Sparks told Melksham News, “It’s a sad day to see the pool close, but it will be great to see a new pool for the town.

“The Blue Pool was so popular and well used back when it was open air; we would have a few hundred people in there on busy days.”

The site is owned by Wiltshire Council. Asked about the future of the site, they told Melksham News, “Wiltshire Council is working closely with Melksham Town Council so there is a clear strategy in place for the publicly-owned sites in the town, to help ensure any decisions made are in the best interest of the long-term future of the local area and its residents.”

6 Responses to Blue Pool closes for the final time