What next for Assembly Hall and Town Hall? Council meeting could be behind closed doors

Melksham Assembly Hall and the Town Hall could be sold off under controversial plans that are being considered by Melksham Town Council. 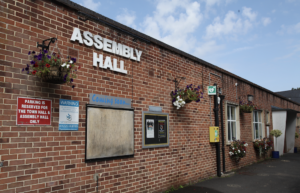 The council is due to discuss options for the future of the two buildings at a special meeting next Tuesday, 9th August with a proposal that the meeting be held in closed session, preventing the press and public from attending.

Councillor Phil Alford told Melksham News, “For too long, I have heard councillors say the town council needs more space, that the Assembly Hall needs £400K for refurbishment, Melksham House should be used for the town, or we should build a new facility.

“With the opening of the campus and with the library and Blue Pool sites being vacated, we now have a once-in-a-lifetime chance to do something about it.

“By bringing Wiltshire Council and Melksham Town Council to the table we can finally explore the possibilities. We can cost the options and put them to the public, but we cannot continue complaining, losing £200k a year on two aging sites without a plan, or try to shift blame and responsibility.

“Now is the time to be creative, trust residents, decide on a plan and move forward for the benefit of the town.”

But the plans have come under fire from fellow councillor Jon Hubbard who said, “We don’t know the details of the options yet, but the Assembly Hall is a massive asset to the town.

“It’s one of the largest halls in Wiltshire, there is nothing else that can compete with it in terms of capacity and I think we would be quite mad to even contemplate getting rid of that without replacing it with an equivalent facility.

“All of the plans I have seen have been talking about significantly smaller facilities and Melksham already has a wealth of smaller halls and I see no reason why the town council should invest taxpayers’ money into facilities which will compete with existing assets that the town has.

“Why should the town council go into competition with the Rachel Fowler Centre or the Riverside Club or the United Church, or any of the other halls in the area? It’s madness.

“Should we subsidise the Assembly Hall? Absolutely. The Assembly Hall is a community asset; that’s the role of councils to make things that aren’t financially viable available to residents. That’s why we invested so heavily in the splashpad. No commercial provider would provide a splashpad free to our residents, but it’s right that there is one.

“Likewise, it’s right that we have a really good meeting venue and entertainment venue in the town.

“Are we subsidising it too much?  Absolutely, yes. What we need is a root and branch review of how we run the Assembly Hall – what we’re doing with it and how we’re doing it, instead of just complaining about how much we are spending on it. We need to look carefully at what goes on there, what does work, what doesn’t work.

“What makes me most angry is that there’s an attempt to do it behind closed doors without the public having a right to even know what councillors are considering.

“We’ve got a meeting coming up with an agenda the public aren’t allowed to see, put together by a working group made up of four councillors and no other councillors were allowed to attend.

“So, four councillors have decided what the options for the Town Hall and the Assembly Hall should be and we’re being asked to choose one of those proposals at a meeting that will be held behind closed doors.

“All we’ve got – and I can disclose this without breaking confidentiality rules – is one flimsy spreadsheet with very dubious-looking numbers on it, which we are told has been prepared by Wiltshire Council.

“It’s an absolute and utter disgrace and it’s the very worst way of running a council.”

11 Responses to What next for Assembly Hall and Town Hall? Council meeting could be behind closed doors