PARKING at the new Melksham Community Campus is to remain free – for the time being at least. 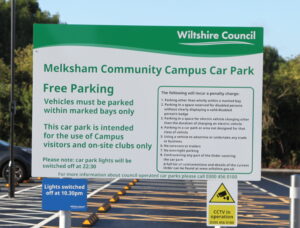 It has brought a sign of relief from users of the campus who feared car parking charges were going to be introduced by Wiltshire Council. Initially, the council said car parking would be free for three hours, before making a U-turn and saying they planned to bring the campus car park in line with the other long stay car parks in Melksham, which are all chargeable.

That brought protests from local people saying that users of the swimming pool, sports centre and library shouldn’t have to pay for parking. Another council U-Turn followed, which meant that when the campus opened in August, parking was free.

But when Wiltshire Council announced increased charges for car parking across the county last week, Melksham campus car park was included in the Traffic Regulation Order.

Was there to be another U-turn? It seems the answer to that is no. The council is sticking with its free parking, but says it will monitor the situation to ensure the free parking isn’t abused.

Cllr Ian Blair-Pilling, Wiltshire Council cabinet member for leisure, told Melksham News, “We want Melksham Community Campus to be as accessible as possible for the local community and therefore as we have previously communicated, the campus car park will be free for campus customers.

“We are monitoring the usage of this car park to ensure that it is used by campus customers only, together with the impact that there may be to reduced use of the neighbouring Wiltshire Council car parks in the town. Following our review, if there is an impact to campus customers’ ability to use the car park, then we will consider bringing in the parking charges, but we seek solutions that are not detrimental to users of the campus.

“We are also currently discussing the most effective way to monitor usage of the car park.

“We included the car park in a larger Traffic Regulation Order, which covered several changes to parking across the county, to ensure we could implement charges swiftly if they are required and it is deemed that there is an impact on campus customers being unable to park.”