MELKSHAM has been paying tribute to Her late Majesty Queen Elizabeth II. 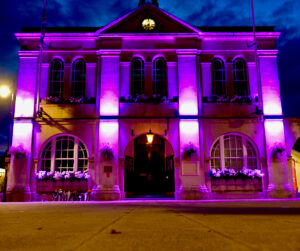 The town hall in purple light.

On Thursday evening last week (8th September), Melksham, along with the rest of the world, heard the sad news of the passing of Queen Elizabeth II, aged 96, Britain’s longest-serving monarch.

The Town Hall has been lit up in purple, the Union Flag on the Town Hall is flying at half-mast and books of condolences have been opened for people to pay their respects.

Tributes have been pouring in for Her Majesty from local dignitaries – including the mayor, the chair of Melksham Without Parish Council and the local MP – and local people have been paying their own tributes and recalling their memories of the Queen’s 70-year reign.

Her eldest son, King Charles III, was officially proclaimed King on Saturday, 10th September, with the national Proclamation being read out on the steps of Melksham Town Hall on Sunday by Melksham mayor, cllr Simon Crundell alongside Deputy Lieutenant of Wiltshire, Robert Floyd.

The people of Melksham have been  invited to sign books of condolences online or at Melksham Town Hall, the sports pavilion at Bowerhill, St Michael’s Church, Melksham Library, St Katharine’s Church in Holt, St. Mary’s Church in Broughton Gifford, and other locations.

A period of national mourning is now in place until the funeral on Monday 19th September.

Our special feature pages can be viewed HERE