The new village hall in Berryfield, which is set to open in the coming months, has been decorated with the town’s culture and heritage, with a piece of public artwork spiralling along the outside of the building. 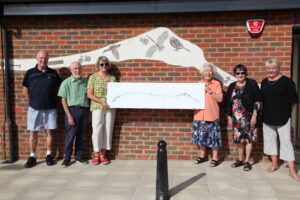 Anticipated to open in early autumn, the centre, which is run by residents with the support of the Melksham Without Parish Council, has been decorated with a canal-shaped mural created by UK artist, Kerry Lemon and filled with drawings of symbols, animals and wildlife relevant to the area.

Melksham Without Parish Council clerk, Teresa Strange said, “The number 72 on the artwork for example relates to how many miles long the canal is.”

Kerry Lemon worked with pupils from the Aloeric Primary School to gain inspiration about what drawings should go inside the mural, created out of sandblasted porcelain. People are encouraged to visit the centre to view the mural and symbols when it has opened to the public.

Teresa said, “We have colouring sheets of the mural and children can come along and do a brass rubbing of some of the symbols. If people want to know the relevance of images on the artwork, they can see a plaque inside the building that explains what the different symbols mean in relation to the town”.

It is hoped that the centre will used for various groups, from mother and toddler sessions to fitness classes, giving residents of the older and newer Berryfield estates a chance to join.

Teresa said, “We are looking forward to opening the community centre and welcoming all residents and any groups to join the space.”

“Over the years, the residents have been meeting in a very tiny space, so they are really looking forward to having a bigger space to meet and utilise.”

Echoing the need for the community to have a bigger meeting space, councillor Richard Wood, of Melksham Without Parish Council said, “The artwork is very rooted in the local area. We hope it is well used by the local people and is a popular venue. It has been a long process and we are very excited for it to open.”

The centre is now taking bookings for any groups or clubs that would like to use the space. For more information about bookings, or to be involved in the committee overseeing the centre, please ring Teresa on 01225 705 700.