PLANS for a coffee shop with a drive-thru facility within Leekes’ car park in Melksham were considered at a meeting of Melksham councillors last month. 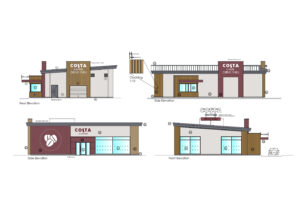 Whilst considering the planned facility, which would have associated car parking and landscaping with the store’s current car park, cllr Saffi Rabey said, “There are lots of good points about it.” She said that the drive-thru would provide a good stop for people passing through on the A350. However, she was concerned about lots of traffic coming out onto the junction.

Cllr Pat Aves agreed, saying that councillors must consider the safety of pedestrians. Cllr Simon Crundell spoke of the problems of traffic from Aldi and MacDonalds, saying that if plans for those businesses were being considered now, councillors might have thought it was not such a good idea with the volume of traffic turning out onto the A350. But cllr Aves replied that there are more people now and more traffic.

Cllr Aves reminded her fellow members of the town council’s economic, development and planning committee that a few years ago, Leekes had put in a planning application to build a hotel in their car park. She said the plans had produced opposition from residents living opposite Leekes, on Avon Road, who were concerned about increased traffic on the A350, producing more noise, along with light pollution from potential signs and additional lights.

Cllr Saffi Rabey said that councillors are viewing the application in light of the A350 as it is today. “It could get a lot quieter if the bypass happens,” she said. Cllr Rabey said she also welcomed the potential of more employment for the town.

Cllr Simon Crundell said, “My concern is that this is the worse 200 metres of the A350 for congestion.” But cllr Rabey said that the traffic build up would only be at specific points of the day and added that she would not want to lose the opportunity of having something good for the town. Cllr Crundell said that if councillors were mindful to support the plans, they should suggest that Leekes could look at the flow of traffic around the car park and back onto the A350, to ensure it is free flowing.

Councillors considered that they did not yet know if any particular business was planned for the site, but suggested that a Costa drive-thru may be considered.

Chair of the meeting, cllr Graham Ellis, concluded that councillors would not object to the plans, but wanted to make it clear that the traffic flow for the whole of the parking area and not just an isolated section of the car park. Members of the committee agreed unanimously. The plans will now be considered by Wiltshire Council.