Mayor’s concern over how ‘green’ town Christmas tree will be

MELKSHAM’S mayor has expressed his concerns about the town’s plans, which were approved earlier this year, to display an interactive digital Christmas tree for the first time, in a bid to be more environmentally friendly. 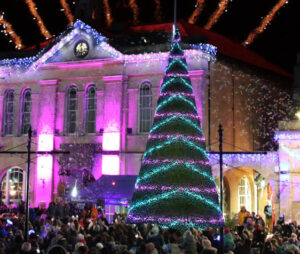 An artist’s impression of the digital Christmas tree.

Cllr Simon Crundell told a council meeting earlier this month that he now believes a digital tree may not be an environmentally friendly option.

In June, the town council approved plans to proceed with a 10–12-metre digital interactive Christmas tree in the Market Place, rather than displaying a traditional Christmas tree, due to the increasing difficulty in sourcing a real tree, along with the cost and impact to the environment.

In a meeting earlier this year, Paul Weymouth of the Melksham Christmas Lights Group said, “[by having a digital tree] it means that we won’t be chopping down a tree that has been growing for 70 years and driving it here.”

However, at a recent town council community, development and management meeting, cllr Crundell said, “I am not convinced with the environmental argument. According to the Carbon Trust study that looked at real Christmas trees verse artificial trees, it suggests an artificial tree [including digital trees] also has a life span of five to seven years compared to a 20-year life span of a six-ft tree sourced from say, Norway.”

“I am not convinced we have it right when we say we dispose of our artificial tree in landfill. To landfill a tree is the single worst way to dispose of a Christmas tree due to the release of methane. It would be much better to chip a tree and use the chippings in our local parks.”

“Then there’s the argument that when you chop down a tree you are not chopping down all of it as you will be leaving a stump in the ground, the root system still stays intact and then the root system will eventually become part of the soil, increasing Co2. It seems, to me, from an environmental perspective the issue [of sourcing a real tree] is in the transit.

“I would suggest it is better to be looking at sourcing a modest tree from Wiltshire.

“Further, I want to suggest that we as a committee bought a chipper instead of renting one, to have this in a central place in the town so local people can bring their trees to be chipped. This will help keep the town tidy and the chippings can also be used in our public parks.”

Melksham Christmas Lights Group have said earlier this year that the new digital tree will help build the town’s reputation as having the ‘biggest and best’ Christmas lights display in the south-west and can be reused each year. It will be an interactive tree, giving children and other visitors the opportunity to engage by changing animations on the tree through pressing some buttons.

Acknowledging the benefits of the digital tree, Cllr Simon Crundell said, “I understand the digital tree will be more interactive and engaging at the Christmas fayre. I just think perhaps we are making a mistake.”

Paul Weymouth said, “Work is continuing on the digital Christmas tree which Melksham Town Council asked us to provide for the town. We have recently had an issue procuring parts, however we are working hard to resolve this and aim to have the tree completed in time.”