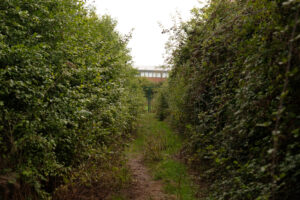 The route of a pathway to the rear of the Oak School, ready for when the path gets the go.

LOCAL councillors are pressing Wiltshire Council to ‘pull their fingers out’ and build a new footpath and cycleway into the rear of Melksham Oak School. Currently, students use the footpath along the busy A365 to access the school, raising concerns for their safety.

Wiltshire Council has promised a new safe footpath into the rear of the school but are ‘dragging their feet’, according to local councillors. The council received a £100,000 developer contribution for the path back in 2019, but since then, progress has been slow.

Back in February, Wiltshire Council said the path had been delayed by the Covid-19 pandemic, but plans were now ‘moving along’.  Six months on, and anger is growing at the slow progress.

Melksham Without Parish Council has been pressing for the path since the school opened in 2010, with pressure increasing as the new housing developments off Eastern Way have been built.

“We’ve been pushing this for a long, long time,” said cllr Richard Wood, chair of the planning committee of Melksham Without. “It really needs to be built as soon as possible for the safety of our kids. It’s a no brainer; there’s no downside. Wiltshire Council are simply letting the detail – whether it should have lights and whether it should be a cycleway as well – get in the way, but that shouldn’t be an excuse – just get it done!”

Cllr David Pafford, Melksham Without vice chair said, “Wiltshire Council keep kicking this down the road. It’s a classic case of feet dragging; they need to pull their fingers out and get it done.

“At the end of the school day, all 1,200+ pupils, minus those picked up by car, have to come out onto the A365 at the same time. You know what it’s like; they burst out together, some on bikes, some on foot; the ones on bikes are trying to overtake, but their route is blocked, so they hop off the pavement into the road on the wrong carriageways, we all know they shouldn’t do it, but we all know they will do it.

“A new path would be much safer – and much healthier. It should have been built years ago, certainly before all the new houses were occupied.”

“It seems shocking that this preliminary work had not been completed a couple of years ago,” said cllr Sankey. “I believe a planning application should be submitted for this path without delay…we have a responsibility to provide safe walking and cycling routes to and from school.”

School principal Alan Henderson told Melksham News, “The traffic along the Bath Road (A365) seems to be getting busier and faster than ever. I can’t believe that this matter has not been taken more seriously by Wiltshire Council, as something clearly needs to be done to make access to and from the school much safer for our students.

“I have always been concerned that Melksham Oak has a single point of entry off a very busy main road. The end of the school day is particularly challenging, with nearly 1,300 students spilling out onto a relatively narrow footpath next to the busy Bath Road, where most drivers seem unaware of the 30mph speed limit.

“The majority of our students then walk or cycle along the footpath into Melksham, which can get very congested and lead to some cyclists using the road, when they shouldn’t.

“A second access point is long overdue and would be very welcome. It would enable us to redirect many students away from the Bath Road which can only be a good thing.”

Back in January, a Wiltshire Council representative told Melksham Without Parish Council, “The next stage is to undertake a topographic survey and preliminary ecological appraisal. These have been commissioned and should be carried out soon. Once the reports have been sent back and the route alignment established, we will arrange a meeting with the school to discuss.”

But since then, progress has stalled.

Cllr Dr Mark McClelland, Wiltshire Council cabinet member for highways said, “Unfortunately this project has been delayed due to issues resulting from the Covid-19 pandemic. Restrictions affected contractors’ ability to make on-site visits and this has led to a backlog, which they are still experiencing.

“We are currently carrying out statutory ecological surveys, however the timescale is dependent on the availability of our contractors, seasonal variations, and the habits of the ecology which would need to be identified. Surveys will not be complete until November 2022 and there is a possibility that further surveys and mitigation of impact on ecology may be required.

“While ecological surveys are carried out, we are still progressing other areas of the project. So far, we have carried out site surveys, a topographic survey, the preliminary design, and submitted a preliminary planning application.

“Council officers have kept local stakeholders informed throughout this process.”