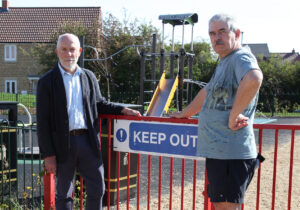 A NEW play park at the Bowood View estate, off Semington Road, will remain closed to the public until a series of safety issues can be resolved.

The park was built by residential property developer, Bellway, as part of the planning permission for the estate but despite the development being finished, the park has remained closed – and the delay has annoyed local residents.

“It’s really disappointing as we were hoping to have it open in time for the summer holidays,” said a member of the newly-formed Berryfield Residents’ Association. “Now the weather is getting colder, the children won’t be able to utilise it as much.

“It would have helped bring the community together as there are a lot of new families to the area.

“Bellway seem to be washing their hands of it. They have built and sold the houses and now aren’t interested. They have even left the council to deal with the residents.

“We feel really let down, especially as the residents are having a battle with Bellway over the surrounding grass areas as well.

“It’s a real shame as our house is absolutely beautiful and the development is stunning. But the residents are not happy.”

The play area won’t be adopted by Melksham Without Parish Council until a series of safety issues the parish council has identified, are resolved.

The park has achieved ROSPA certification and was due to be adopted by Melksham Without Parish Council. However, the parish council has identified some safety issues that remain in the design of the play area that ‘is not the specification agreed with Bellway back in 2018.’  As a result, the park remains closed until the issues have been addressed.

Melksham Without Parish Council clerk Teresa Strange said, “The parish council are still not happy that the Bowood View play area is at an adoptable state. There are a couple of bits outstanding from the post-installation inspection report. The real issue is the surfacing to the area. The parish council do not feel that the safety surfacing is up to standard as it is too thin in places and with joints that can quickly become trip hazards. The path is much more gravel than a solid path and we are in discussion with Bellway about replacing with tarmac as stones already cover the play surface. The grass section is full of stones too.

“This overall design is not the specification agreed with Bellway back in 2018. As a comparison, the play area installed at a similar time by the same company at nearby Pathfinder Place meets the parish council’s agreed specifications.”

In a statement from Bellway about how the company plans to address the safety issues to make it suitable for adoption, they said, “Bellway is working with the local authority and parish council to resolve the outstanding issues which are delaying the opening of the play area at Bowood View. Although the play area received certification from ROSPA late last year, we have been unable to open due to some very minor snagging issues, which have been resolved, and an issue with material used for the current path through the play area.

“Bellway has offered to tarmac this pathway as a gesture of goodwill and we are awaiting approval to proceed with these works. We hope to be able to open the play area once this work has received approval over the coming weeks.”

The parish council is currently working with Bellway to resolve these issues to ensure the area can be opened and adopted from Bellway into the parish council’s ownership.