Awards for Melksham’s ‘People of the Year’

WINNERS of Melksham News’ Group of the Year and Person of the Year 2022 are the Melksham Christmas Lights group and organiser of the Food & River Festival, and founder of the town’s community larder, Adrienne Westbrook. 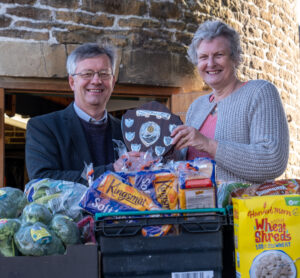 Group of the Year, Melksham Christmas Lights group is a voluntary team that produce the town’s dazzling Christmas lights display each year; Melksham Person of the Year, Adrienne Westbrook, started the community larder last year, helping to give surplus food to people in the town to minimise food waste, as well as organising the town’s annual Food & River Festival and being actively involved in welcoming Ukrainian families to Melksham.

The nomination for Melksham Christmas Lights Group said, “The work they do throughout the year to make Melksham look stunning with lights is amazing. A real uplift to community spirit, and the envy of other towns!” 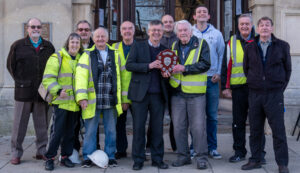 One of the team’s volunteers, Len Bealing, said, “I have been doing the lights for 45 years plus. We try to get it right and we are still trying. The group is fantastic, we have such good comradeship. We get great comments from people around the town; we’ve had lots of comments this year about the digital tree, that people are calling the Marmite tree. I think a digital tree is the way things have got to go, people who are interested in saving the environment thought it was fantastic because we were not cutting a tree down.”

Volunteer Peter Reynolds said, “Winning the award is nice, it gives a sense of social pride and it’s nice to be recognised for what we do.”

Volunteer Alan Baines said, “It’s nice that whilst we are putting the lights up, we get very good comments from passers-by. A number of people stop us and say thank you, they buy us cups of tea and bring us buns. It can get wet and it can get cold, but we just do the best we can.”

The nomination for Melksham’s Person of the Year, Adrienne Westbrook, said, “I feel she has done so much for Melksham. She organises the Food and River Festival and this year, helped to set up and run the Melksham Community Larder in the Round House, which collects food from supermarkets every day. As well as stopping food going to landfill, she is helping people who might go hungry. She has also been actively involved in welcoming Ukrainian families to Melksham, hosting a family herself. I think she would be a worthy winner of this award.”

Adrienne said, “I am so grateful to win this award and thankful to whoever nominated me. My favourite thing about Melksham is the community spirit and people’s willingness to volunteer their time. The award really reflects how I feel about things. I used to be a school teacher and have always been interested in supporting and helping people. I have always been very thoughtful and aware of people who are not as fortunate. My whole ethos in life is to help and support people.

“I want to thank the town council for giving us the Round House for free and to Jon at GoodNews Church who really helped us in using That Meeting Space when we started out last year.”

The other nominations for the Melksham News Person of the Year 2022 were: Tracey Steele who runs On the Block Fitness training, a women’s fitness group dedicated to helping women in Melksham be more confident. Tracey also held a female-only boxing match that raised £5,000 for a mental health and suicide prevention charity; Jeanette Nash who runs a Singing Group (supported by her husband, Mike), which is now in its 7th/8th year, providing weekly singing sessions for all the community, pantomimes and social trips away; Wendy Isaacs, was nominated for setting up the pet foodbank and Melksham lost and found pets group, which is helping reunite pets with their owners; Miriam Zaccarelli, the town council’s community and development officer, who always goes ‘above and beyond’ and helps to organise lots of events in the town, and has coordinated fundraising for Ukrainian families; Jenny and Graham Butcher were nominated for their work in maintaining and looking after Bowerhill picnic area and maintaining the area from the bridleway to the canal.