PARISH councillors have reviewed amended plans and reiterated concerns about 144 new dwellings that are due to be built on agricultural land between Semington Road and the A350, to the north of the Hampton Park commercial area. 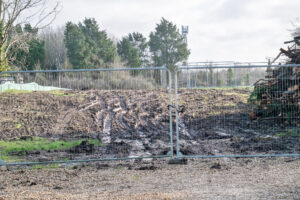 Plans for the development were approved by Wiltshire Council in 2021 despite strong objections from local people and the parish council. The decision was made in light of Wiltshire Council’s failure to maintain a five-year land supply – which means there is an insufficient number of ‘deliverable sites’ to provide five years’ worth of housing

At the planning meeting at Melksham Without Parish Council held last month, councillors raised and reiterated concerns about the loss of green space and wildlife habitat, the impact of increased traffic to the area and the town’s already stretched resources.

Chair of the planning committee, cllr Richard Wood said, “This is obviously going ahead because it’s been approved but we are still totally opposed and against this whole development. It is in no way sustainable. I raised the sustainability factor but this was ignored when Wiltshire Council gave planning permission. 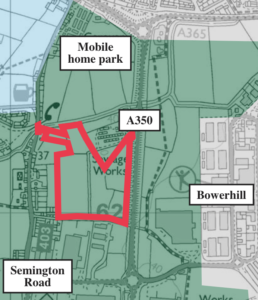 “One of our main concerns is that it’s just so far for the kids to go to school. Aloeric school is full and if a parent is walking their five-year-old to the new school site at Pathfinder it’s just such a long walk. We need a new footpath somewhere.”

Whilst welcoming the change in housing mix to more smaller units, councillors asked for a traffic management system to be put in place to reduce the potential of traffic speeding along the straight spinal road; they have asked for two bus shelters to be installed with real-time digital information about bus arrival times and departures, proper seating to be installed at the shelters, similar to the shelters at the Bowood development; suitable bin collection points to be created; a fence to be installed between the development and Shails Lane; and for the provision to support and increase biodiversity in the area. They have also requested the inclusion of two affordable accessible bungalows as part of the plans.

Concerns about Shails Lane were raised, with councillors asking for an increase in visitor parking; for contractors to be made aware of the proper entrance points to the development to avoid them ‘persistently accessing the site through Shails Lane.’

Members also reiterated their previous request, following concerns raised by residents of Shails Lane residents for consideration to be given to some form of barrier or gate to be installed at the entrance to Shails Lane, in order to discourage residents from the development and those who use the lane for fly tipping from accessing the lane.

Parish councillors have also asked for a bridge to be created to join the area up with the Bowood View development. They also said, “As previously stated, there is still no provision for a cycle route within the development, despite Semington Road having been designated a National Cycleway (NCN 403) several years ago.”

Cllr Richard Wood said, “We are just not happy with the way this development is set out. We’ll try make it a good now because it is going ahead.”