A PLANNING application has received objections by parish and town councillors, for 210 residential dwellings and a care home to be built on land south of Western Way in Melksham. 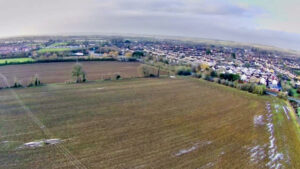 At the Melksham Without Parish Council (MWPC) meeting held last month, councillors raised concerns that building on the site would mean the loss of the green buffer between the separate communities of Bowerhill and Melksham. They also raised concerns about the existing infrastructure such as schools, GP surgeries and roads, saying they would not cope with the increased number of residents.

Councillors were concerned that the applicant did not appear to have addressed the concerns previously raised by the NHS, who had stated they had no residual capacity within their current GP offer in Melksham. This related in particular to the 70-bed care home, and the impact of the increase in residents with complex needs.

The parish council also noted that whilst Wiltshire Council cannot currently prove a 5-year land supply, members felt it important to note Melksham has met and exceeded its housing allocation for the period 2006-2026 for 2,370 houses by 17%.  They said that the Housing Site Allocations Plan, adopted in February 2020, notes this fact and has not included a housing allocation for Melksham.

Chair of the MWPC planning committee councillor Richard Wood said, “This proposal is so wrong. The infrastructure is not enough to cope. We have even been informed by the NHS that the NHS provisions in the area are at capacity. Ideally it would be left as agricultural land but if it is developed, it should be developed as part of the Bowerhill industrial estate, it would be good to leave this as a green buffer though.

The proposal was also objected to by town councillors, when they discussed this development in the economic, development and planning committee on Monday 12th December. The planned development is in the jurisdiction of Melksham Without Parish Council, but Melksham Town Council can also comment on the application.

At the town council meeting, cllr Gary Cooke said, “We reject these plans. This is not within our neighbourhood plan and ultimately our main neighbourhood plan was made for a reason. Everything proposed that is not part of the plan should be refused for now unless there’s mitigating circumstances of which I cannot see in this case. These are houses in a non-housing zone.”

The plans will now be decided by Wiltshire Council.