MELKSHAM was recently featured on the BBC television programme Escape to the Country, showing views of the town including Church Walk and the weekly Tuesday market, held in the town’s Market Place. 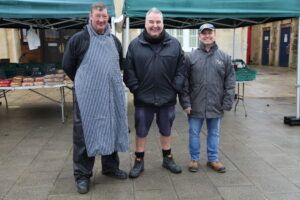 The programme, presented by Nicki Chapman, followed two people who were looking to move to Wiltshire. The film crew came to Melksham so the couple could experience life in a country town, including the Tuesday market, which enables the community to shop locally from independent businesses.

Stallholder Andy, who has a sweets, biscuits and cake stall, was interviewed. He said, “I think it’s really good to be featured on the programme, it’s great for all of the town and good for people to know we have a market here. The market has gone well over the past year or so! I’ve had a few people say that they have seen us on TV!”

Charlie who runs the fish stall said, “It’s really great Melksham was featured on the programme, it’s such a good thing for the town and market.”

Melksham News’s editor, Ian Drew, was also interviewed, and spoke about the importance of the market.

Melksham’s feature on Escape to the Country aired in series 23, episode 7 on Monday 3rd January; it can be watched on BBC iplayer via this link,  https:// www.bbc.co.uk/iplayer/episode/m001gqxx/escape-to-the-country-series-23-27-wiltshire