Park maintenance building to be demolished and options considered

THE derelict maintenance building at King George V Park will be demolished, but a new facility will now not be built in the park, due to a ‘dramatic’ rise in construction costs. 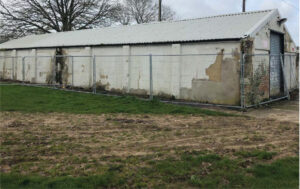 The building, which was used to store plant and equipment for the town council’s amenities team, was previously owned by Wiltshire Council but has now deteriorated and is unused. It was included in some services that the town council took over from Wiltshire Council and councillors were told that they needed a depot when taking over these services. In 2021, a new maintenance building was estimated to cost the council £200,000 over 15 years from a public works loan.

In October that year, a presentation from NVB architects was given to the town council, resulting in a ‘unanimous’ vote for the project, and planning permission was later agreed by Wiltshire Council.

However, at a town council committee meeting held a year later, in October 2022, it was highlighted that a detailed costing plan for the project was still not in place.

At a full town council meeting, held on 19th December, councillors voted to demolish the existing unit at King George V Park and to not yet replace it in the park.

Instead, the council will continue renting a unit at Bowerhill, working with the owner to adapt the unit to meet the needs of the amenities team. The council will also monitor the market for a suitable property to purchase, a more suitable rental property and for options for sites to build a maintenance shed.

Melksham’s mayor, councillor Simon Crundell said, “The cost of construction projects is going up and the cost of this has now almost doubled to £401,000 from what it was.”

Urging councillors to move on with this project cllr Saffi Rabey said, “The further we kick this down the line the further the numbers will increase.”

The town council’s clerk, Linda Roberts, confirmed she was instigating an asbestos and bat survey before the building is demolished.