A project to generate hydro-electricity using the town’s weir is moving forward, after town councillors agree to fund a report that details how this could work. 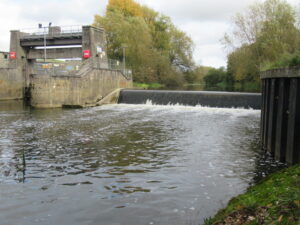 At a full town council meeting on Monday 28th November, councillors voted to fund up to £3,200 plus VAT, to update a report that was created in 2012 about this project; the report will include details that will outline the feasibility of the town’s existing weir being used to generate energy.

The proposal was initially put forward at the economic, development and planning committee meeting on Monday 27th October by cllr Colin Goodhind, on behalf of the Wilts & Berks Canal Trust.

At that meeting councillors were ‘impressed’ with the proposal and cllr Jon Hubbard said could be a ‘golden opportunity’ for Melksham, particularly as it fits in with the town council’s plans to address climate change, biodiversity and the environment.

The plans are part of the Melksham Link Canal project which originally suggested installing a new weir to generate the energy. However, due to modern advances in technology, the existing weir could potentially be used to do this.

Inspiration for this project would be taken from other town’s such as Bradford on Avon that currently uses the weir to generate hydropower and have been doing this for several years.

The town council will fund the report to learn more about how this could work for Melksham.